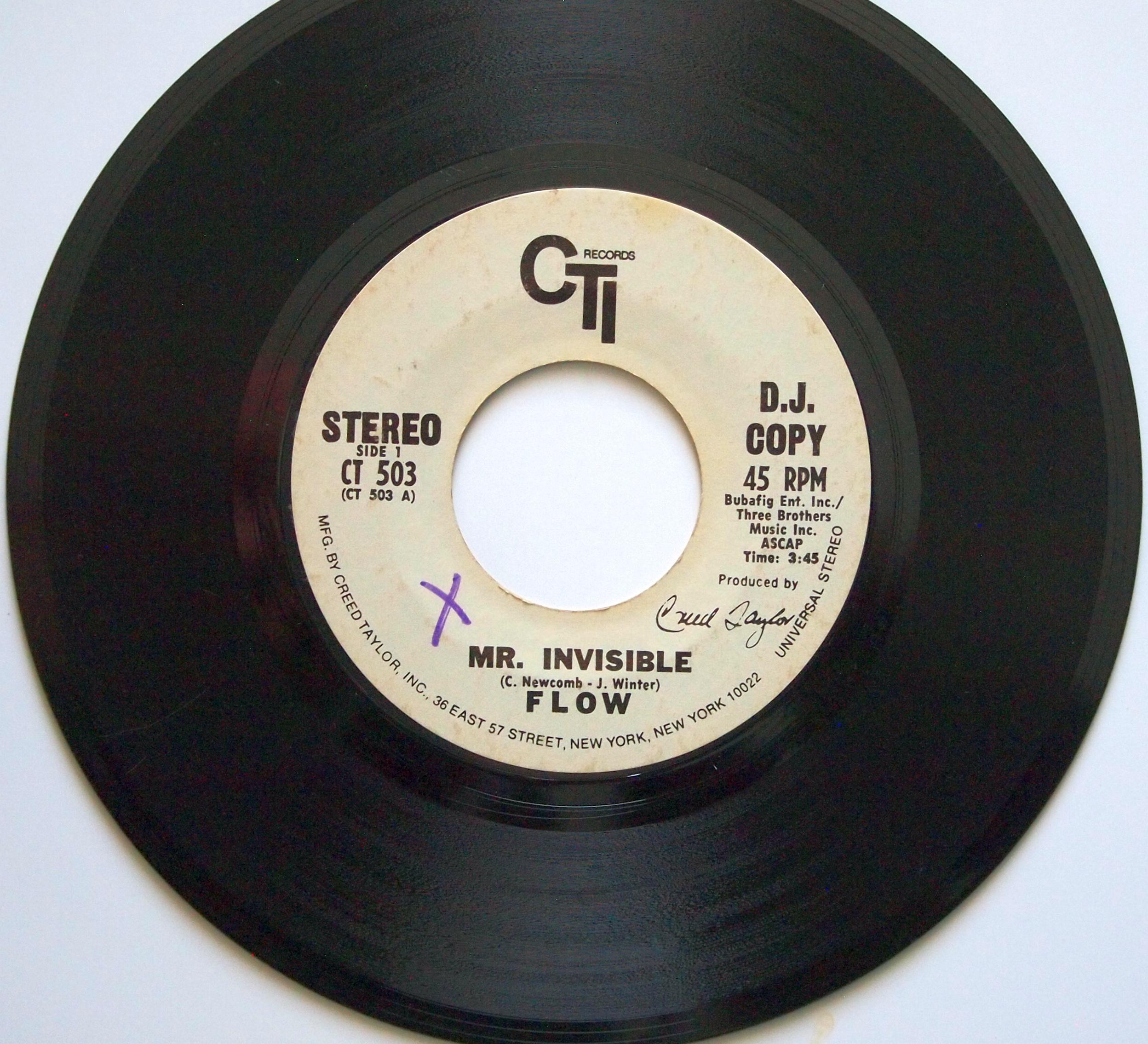 As part of evolving CTI beyond jazz, Taylor had spotted and signed a band called Flow. The only thing you need to know about Flow for now, is that the band included one Don Felder, who would later go on to become a key member of the Eagles and be one of the writers of Hotel California.

The Flow single, released as CT 503, included ‘Mr Invisible’ on the A-side, and ‘Daddy’ on the B-Side. Both tracks were taken from an album recorded in December 1969, and January 1970 at Rudy Van Gelder studio. Like CT 502, there is no evidence that this single was ever generally released on a green label in the USA, only the white promo version exists, I assume to promote the album. The tracks themselves are straight lifts from the album, same length etc.

How did Don Felder come to record for Creed Taylor? Don himself set out the whole relationship, and why there was no follow-up to the album.

“I worked here [New York City] for about a year and a half. We made a record with a band called Flow, and signed by a guy named Creed Taylor for CTI records. Creed was one of the biggest jazz producers in the business. I think Quincy Jones was on that label with me; Hubert laws was on that label.”

“We had a, it was kind of a jazz, a label, and we were a jazz fusion rock band. He [Creed] saw his play at the Fillmore East one night and signed us literally the following week to his record label.”

“After about a year and a half, I decided I, I just didn’t want to live in New York city. It’s a tough transition from Beachbum in Florida up to Eskimo here. And living in the city was a little, little difficult for me. My high school girlfriend had moved back to Boston, so I went up to visit her a couple of times and decided that I was gonna move to Boston because we wanted to get back together. I asked Creed Taylor if he would help me, he called Berkeley school of music and set up an appointment there for me to go in. He also called, two or three recording studios up there to give me an introduction to that area.”

The album, as best I can work out from looking at old Billboard and Cash Box magazines was actually released the first week of May 1970. As far as fusion rock, while Flow were done with CTI, Creed wasn’t done with jazz-fusion-rock. Some years later he would produce Allan Holdsworth’s Velvet Darkness, which would turn out to be another controversial project, one of many for Creed.

I have more info on ow and background detail for the album post when I get to it. I’ve made a number of updates to their Discogs artist page, see below.