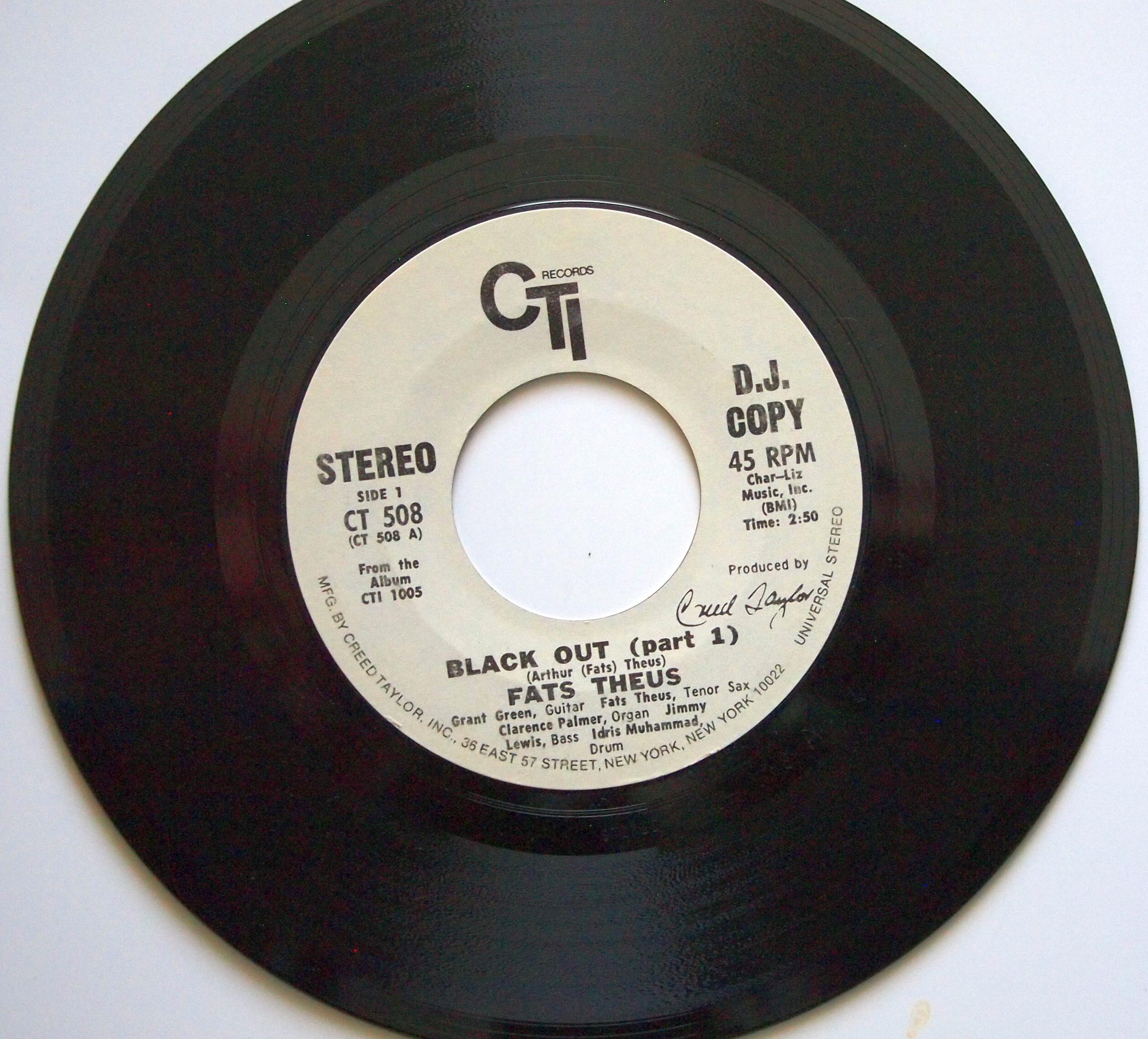 The album Recorded over two days in July 1970 at Rudy Van Gelders studio, and was produced by Creed. It’s not known what Creed’s motivation was for this recording was, as Doug Payne suggested, “you could argue he was setting the stage for Kudu with this one”.

It’s speculated that the Theus album was a way to get Grant Greene into the studio. Also of note, as far as I’m aware, this was the first CTI recording that the legendary drummer, Idris Muhammad recorded for Creed. Doug Payne pointed out that Idris Muhammed first recorded for CTI on George Benson’s, 1969 “Shape of Things To Come” album. Interestingly, having had that pointed out, I went back and checked and as he was then, Leo Morris played drums for Benson’s 1968 “The Other Side of Abbey Road” as well as many other Taylor produced albums around that time. Muhammad would go on to become a mainstay of the KUDU label.

The single itself consists of Black Out Pt.1 and Pt. 2 – Issued as usual as a white label promo, but in this case, also issued as green label general release.

Side-A runs 2-minutes 50-seconds, and Side-B runs 2-minutes 20-seconds. Compared to the title track from the album, which runs 5:20. The singles are straight edits, with a minor edit for the entry for Pt 2.

Who Was “Fats” Theus?

We know it was Arthur “Fats” Theus. Pretty much other than his recording history, the man is an enigma. He was described on his first Billy Larkin album as “a cat from LA“.

I found a tweet from 2013 which implies Fats has died.

We know he had been recording since the early 50’s, and had featured on a number of Johnny Ace recordings, playing Sax, before Johnny died, apparently, from an accidental self-inflicted gunshot wound at the age of 25. After that, he found his way into Oscar McLollie and His Honey Jumpers, you can hear Fats sax in both part-1 and specifically in part-2 of the single, “The Honey Jump”. They are uncredited roles, but we know from Vacher’s book “Swinging on Central Avenue” – African American Jazz in Los Angeles.

Then I got Christine, piano, a fellow named Fats Theus on tenor, bassist Warren McOwens; and [drummer] Bert Brooks to go into the Riviera Hotel when they opened it up in Las Vegas. [The Riviera opened on April 20,1955.] We went there for two weeks and stayed there nine months. The band was called Oscar McLollie and his Honey Jumpers, and I quit when I found out McLollie was making all the money and we were doing all the work.

Fats went on to record with Little Johnny Parker, recorded the 1956 hit “Be Cool My Heart” as Fatso Theus and the Flairs and another single “Rock ‘n’ Roll Drive-ln” for Aladdin records also in 1956. From then I can find nothing on Fats until he re-appeared in 1966.

He became regular with Bill Larkin and the Delegates, as well as the Jimmy McGriff Band. We know McGriff had also been in the Little Johnny Parker band, along with Horace Ott, and O’Donnell Levy who both of whom Fats would work with again.

Prior to the CTI recording session, Fats had co-written and recorded “The Worm” by Jimmy McGriff, the title track of the album of the same name, recorded in the summer of 1968 and was new on the US album chart on 28 December 1968.

Fats also wrote and co-wrote a number of the songs that were on the Black Out CTI album, which were copyright and published by Char-Liz Music, one of Creeds publishing companies. We also know that around the same time he was recording Black Out, Fats was recording Jimmy McGriff album “Something To Listen To” also at Van Gelders studio. Black Out was the first of three “Black” albums Theus was involved in.

Fats went on the following year to record with O’Donel Levy on Black Velvet, a stone soul classic. O’Donel and Theus also recorded on McGriffs Black Pearl in 1971 lar, and there are lots more overlaps. We know he played with Grant Green both on his album and others, and live. And that’s it. Do you know anything else about Arthur, aka “Fats” Theus? Leave a comment below