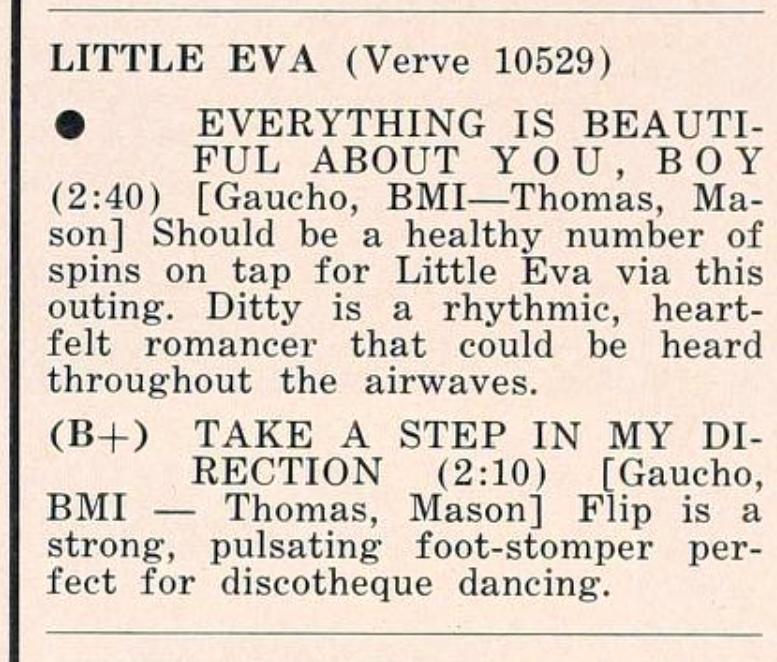 Perhaps one of the artists that Creed Taylor is least known for producing was Little Eva. Yes, The Loco-motion Eva. It’s so little known that her singles Creed produced for Verve are not even included on Little Eva’s wikipedia page. (fixed).

In 1962, she was only 16 when The Loco-motion hit #1, and by 1964, when her singles were failing to make the top-20  Eva was declared passe. It’s worth noting that around the same time as The Loco-Motion was in the charts, so was Little Esther (Phillips) who would provide Creed with one of his biggest single chart hits.

Eva split with her label Dimension and the songwriting team of Goffin and King, for whom she was a babysitter prior to recording The Loco-motion, and was working hard on the college music circuit by 1966. It’s hard to imagine in today’s terms, someone who’d had such a massive worldwide hit would end up 3-years later on the college circuit in the USA(*1).

Apart from this, which makes it clear Taylor was looking for the right songs for Little Eva, and some Billboard listings, and reviews with predictions, I can’t find anything about why, how or what Verve and Creed wanted to achieve with Little Eva. Based on a couple of reviews, and how popular one of the B-sides is still on the Northern Soul scene in the UK, they picked the wrong A-side for both singles.

The Little Eva session, her first of two for Verve, was recorded in New York City on October 17, 1966, yielding only “Bend It” and “Just One Word Ain’t Enough.” The second session, recorded on April 4, 1967, yielded “Take a Step in My Direction,” “Everything is Beautiful About You, Boy” and the unissued “He’s Coming To My Place.”

The interesting thing about this second session is that it was arranged by Artie Butler, whose Taylor-produced album for A&M/CTI, “Have You Met Miss Jones?,” was recorded in early 1968, and engineered by Brooks Arthur, whose third-streamish “Sole Forms” (Verve V/V6-8650) was produced by Creed and recorded by Rudy Van Gelder in February 1966. (*1)

Whatever the plan was, it probably wasn’t helped by Creed Taylor announcing he was to leave Verve just a couple of months later. Taylor was indeed, as Record Mirror said “on the move”.

Eva quit the music business in 1970, and ended up back as a maid and housekeeper.

*1 Thanks to Doug Payne for the recording details.