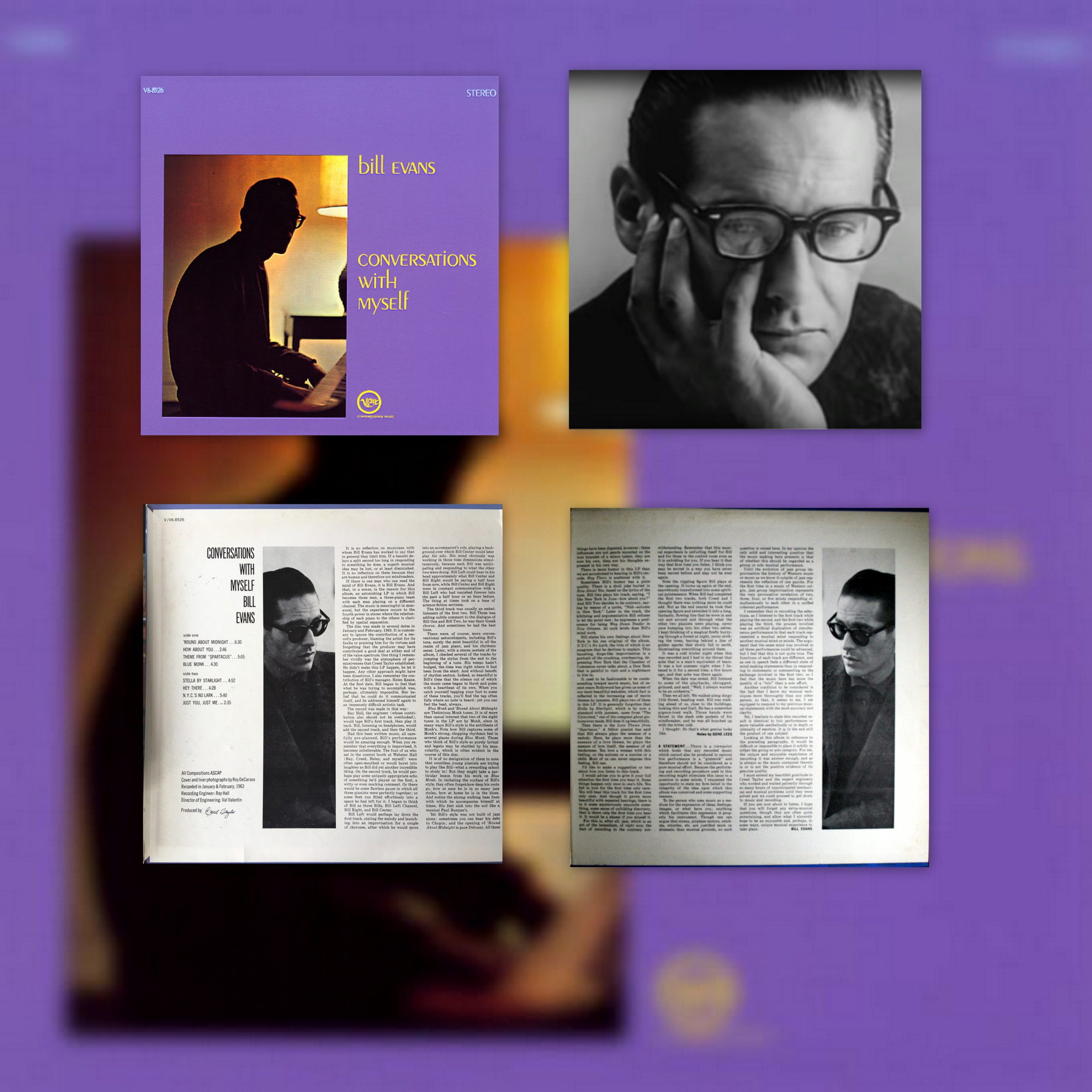 [Thanks to Doug Payne for the edits and corrections]

On this day, February 6th, 1963, 57-years ago, Bill Evans entered the studio for a series of dates with himself as a leader and sideman at Webster Hall in New York City. He’d be in the studio again on the 9th, and finally on February 20th.

The album notes, by Gene Lees, claim “The disc was made in several dates in January and February 1963”. Lees, was according to Peter Pettingers 2002 biography of Evans, “like a brother to [Evans] him at that time”. I’ve not been able to find any reference for the January date(s).

Evans had just moved to Verve records at the start of 1963, while he was contracted to a couple more projects for his prior label, Riverside. While Evans completed those projects, they were completely different from anything Evans had done before, and would be shelved. In the the late 1980’s by Riverside Producer Orin Keepnews, as part of The Complete Riverside Recordings finally released the recordings.

Evans and Taylor had worked together before. Taylor recruited Evans to play on his first release on ABC-Paramount, The Great Kai and J. J. released in 191 as catalog number A-1.

The 1963 sessions at Webster Hall for Verve, were the recording sessions that formed a somewhat controversial album, where Evans planned to overdub himself. Evans was concerned that  what he was trying to achieve was impossible. Ray Hall would record the first track of the song, play it back to Bill who would listen on headphones and play the second, and then the third track. Allegedly, at the time of the recording sessions, Evans was “suffering from heroin withdrawal”. Helen Keane and Gene Lees let Evans convince them he could finish the recording, turned down the lights, and magic happened.

While the overdubbing technique had been around for a while, and even used in classical recordings, it was viewed with suspicion in jazz circles. Interestingly, Taylor would use this technique on many albums, some even more controversially, by replacing the recorded musicians with different musicians.

The album, originally just eight songs, was to become a 6TH ANNUAL GRAMMY AWARDS (1963), winner for “BEST INSTRUMENTAL JAZZ PERFORMANCE – SOLOIST OR SMALL GROUP”. An award that Evans had been nominated for in both ’61, and ’62. Evans would go on to be nominated 31 times and win seven Grammy Awards.

At the end of the recording sessions, Lees in his album notes says

When the date was ended, Bill listened to some of the playbacks, shrugged, grinned and said “Well, I always wanted to be an orchestra”.

Then we all left. We walked along dingy 11th Street, heading west. Bill was walking ahead of us, close to the buildings, looking thin and frail. He Has a somewhat pigeon-toed walk. Those hands were thrust in the slash side pockets of his windbreaker, and he was all hunched up with the bitter cold. I thought: So that’s what genius looks like.

Later that year, Creed Taylor pushed Evans further to becoming a star recording an album of show, TV tunes, Theme from The V.I.Ps and Other Great Songs. Opinion on this Taylor lead effort was divided in the same way that it was with the Evans overdubbing. This was a theme for ongoing complaint about Taylors work, by trying to reach as many people as possible, he would alienate the purists. Conversations With Myself is my favorite work that Evans did with Creed Taylor.

I have a somewhat battered UK, 1963 Mono pressing of Conversations and a Verve CD from 1997. The CD versions added two more titles, “Bemsha Swing”, and “A Sleepin’ Bee”. What made the album special for me was the inclusion of the “Spartacus Love Theme”.

My Father had the original Spartacus movie soundtrack album, it was a regular in our house on Sundays. The “Spartacus Love Theme” track was also featured on a Ramsey Lewis live album.

My favorite version though remains the Terry Callier version, especially the Zero 7 remix, taken from the Callier album Total Recall. Released in 1998, and by super coincidence I’m sure, released on the Verve imprint, Verve Forecast, some 25-years after Evans was in the studio. Ironically, as I sat writing this, I heard that Kirk Douglas,  the star of Stanley Kubrick’s film, had died.

Sadly youtube have blocked my continuous album mix in the USA and Europe for copyright infringement, so listen instead to this youtube playlist of the 10-track CD release.

Universal Mind of Bill Evans (Youtube)
– Bill Evans on the Creative Process and Self-Teaching Conversation With His Brother Harry, 1966

0 Replies to “On This Day – A Conversation With Myself”